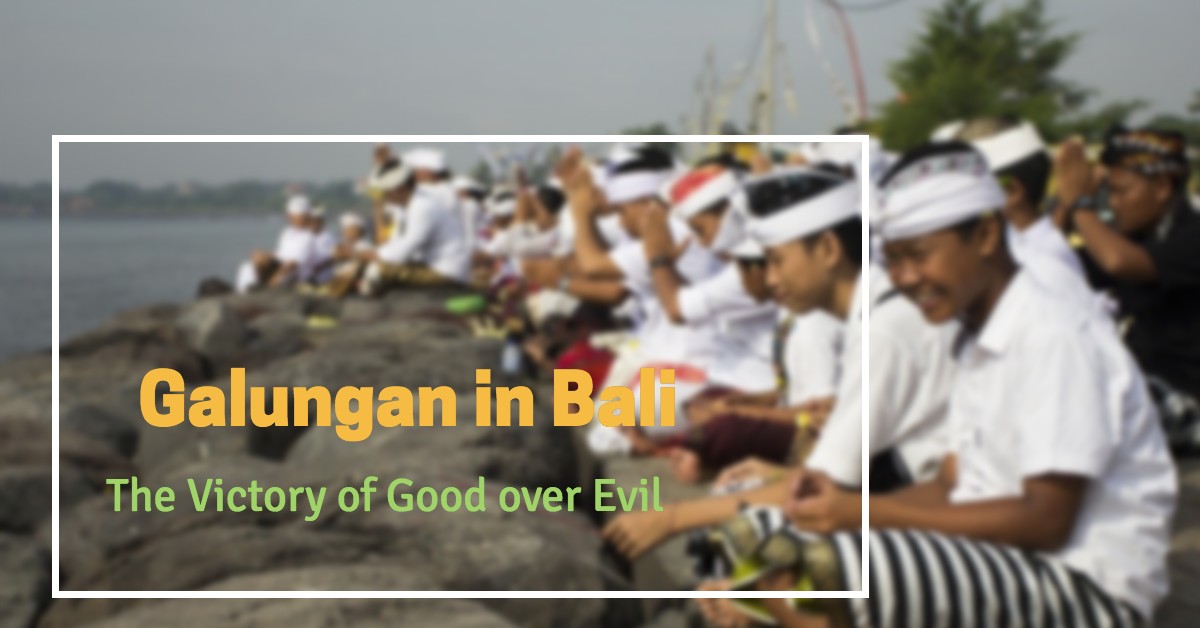 Galungan in Bali this year falls between Wednesday, February 19 and ends Saturday 29 February.  As a traveller, if you are planning to go to Bali, you may want to know about one of the hugest public ceremony and holidays in Bali.

The ceremonies surrounding Galungan are nothing short of spectacular. Regular life in Bali halts for a while and the Hindu Balinese take to the roads, beaches and villages to pray and pay homage.  Galungan in Bali is a festival of joy and celebration.  It is the epic celebration of the victory of good over evil.

The Festival of Galungan in Bali

Galungan in Bali is the festival that gives homage to the God of Creation. It is the victory of good over evil. This colourful festivity marks the triumph of Dharma against Adharma in Hindu religion.  It also marks the downfall of the powerful but evil king called Mayadenawa.

As legend has it, King Mayadenawa was the all-powerful and undefeatable king who would not let his subjects pray to the Hindu Gods. The subjects were true to their soul and wanted to embrace Hinduism.  Finally, in a bloody battle in Gianyar, the Lord Indra defeated him.

Nothing of particular note about that, except for the fact that King Mayadenawa used many dirty tricks to avoid being defeated – including turning into a statue of stone.  However, finally the good prevailed over the evil and Lord Indra armed with bow and arrow made a perfect aim and killed the King.  This is fabled to have happened on the location of the Tirta Empul Temple – the Temple of the Holy Waters – that will be the fulcrum of celebrations during Galungan 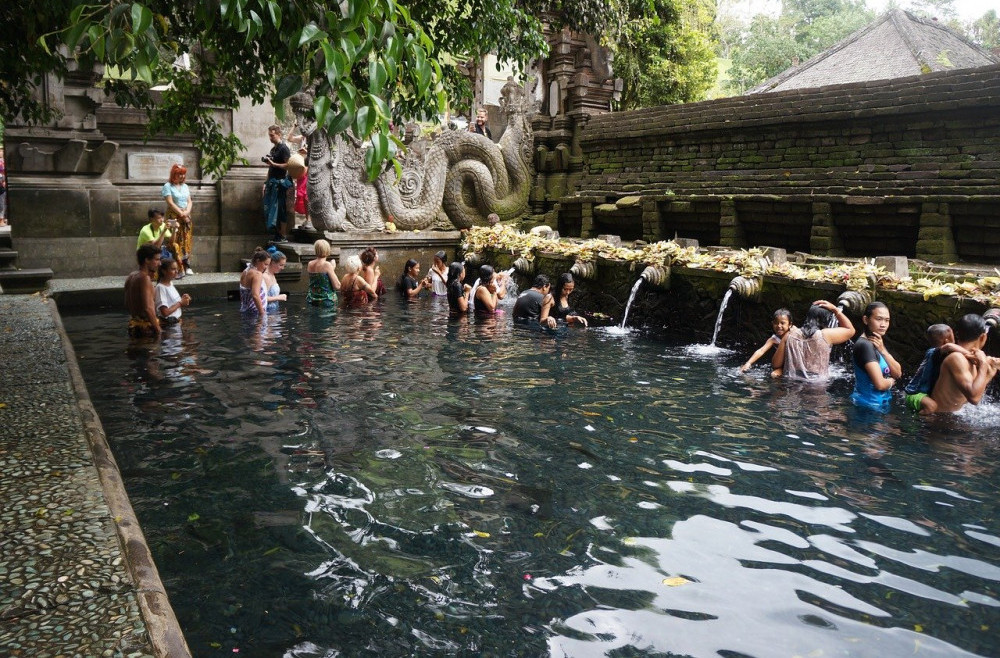 Preparation for Galungan in Bali

Preparations for the festival of Galungan in Bali start a few days prior to the actual full week of ceremonies.  Bamboo poles are cut and trimmed and are then adorned with imaginative natural artefacts which are made of coconut leaves.  The Penjors as they are called are placed in front of each house or Toko (shops) and therefore line up all the streets of Bali.

It is not unusual to see men carrying 20ft bamboo poles on a motorbike prior to the ceremony. Women sit at their front porch and deftly carve the flattened coconut leaves into origami patters that catch the imagination.

The Ceremonies of Galungan – All of Bali Halts!

Galungan is Religion, Tradition and Culture in Bali.  Since it is one of the most important Balinese festivals to mark the creator of all the ancestral spirits – it is quite important to know what to expect if you are a tourist during this time of the year.

Galungan is believed to be the time when the deceased spirits of ancestral relatives will return to visit their homes.  For this reason, every Balinese will return to the village in which he or she was born in order to pay homage through prayers and offerings and welcome back the spirits of the past. For this reason, banks, government offices, shops which are run by Balinese owners are closed. Regular life in Bali halts during the Galungan ceremonies and is instead replaced with aa very visual ceremonial celebration of colour.

The Balinese women dress up in traditional clothes of laced kebayas worn with a sash at the waist over beautiful sarongs.

The men are typically wearing white scarves around their head and wear white tunics over their sarongs.

Balinese women with kebaya and offerings

Good Balinese food is served around all the families.  At the ancestral homes, women are busy preparing traditional Balinese food such as the Babi Guling (suckling pig).  The food is taken from home to home along with the flower and fruit offerings.  There are processions of women holding baskets of offerings over their heads, regally walking down the roads to holy meeting points.

Fruit especially bananas are used for offerings.  Green bananas are wrapped and covered in large clay pots to speed up the ripening process.  Jaja or fried rice cakes are cooked and prepared to add to the offerings basket.

A day prior to Galungan in Bali, pigs and chickens are slaughtered in special ceremonies in order to make the food for the festivities to follow.

Festivities on the Actual Day of Galungan in Bali

Galungan day in Bali is marked with prayers at the temple.  Do not be deceived – it is not the one temple in Bali. There are hundreds if not thousands of Temples.  Each more exotic than the other.  Temples or Puras as they are known in Balinese will range from simple shrines to large ornate structures which feature the traditional lava stone of Bali. Some of the Temples are iconic and are a landmark for tourists. Temples are usually crowded with Balinese on Galungan day and it may be hard for solo travellers to inch in.

The significance of the Galungan day is the prayers.  The families wearing traditional clothes attend the Temple prayers together.  The pray to remind themselves of their beautiful heritage.  Galungan is a renewal and reminder ceremony and a commitment to make tomorrow a better day for themselves and for others.

Galungan and later Kuningan are the two biggest events that occur during the Gregorian year of the Hindu calendar.  This means that the festivities happen every 210 days and as such the dates change every year.  Some of the more notable temples are Besakih – which is the Mother Temple – near Mount Agung.  The Uluwatu Temple perched on the cliffside of Jimbaran and Tanah Lot Temple – which is an ancient rock with golden sunsets for a backdrop and traditionally believed to be the rock where the first prophet from India brought the Hindu faith to Bali. 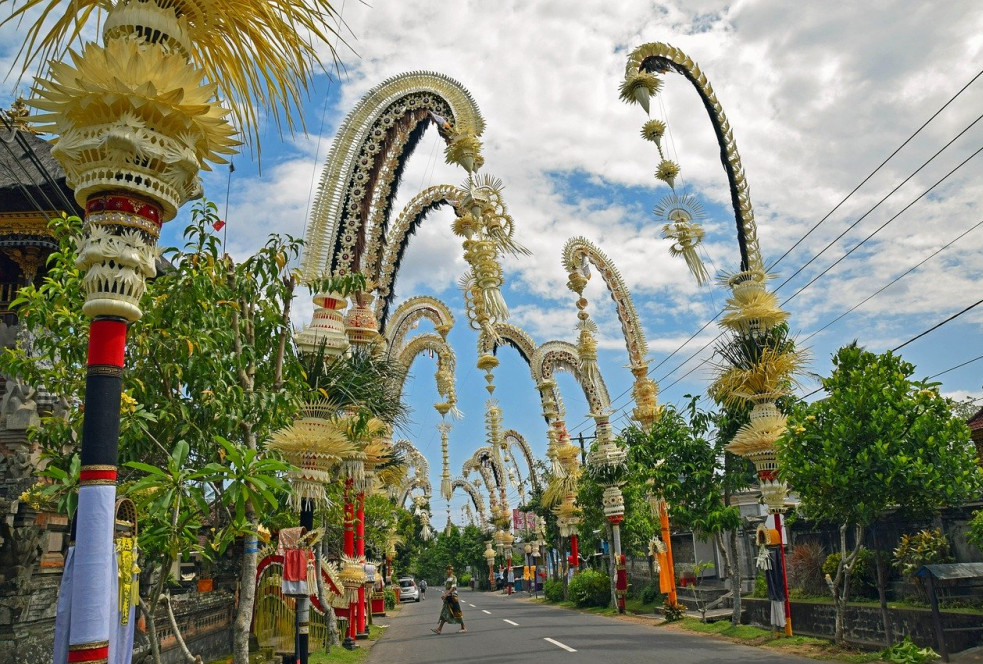 The traditional Penjor that lines the roads in Bali during Galungan

The days following Galungan in Bali are known as Manis Galungang (Manis being sweet). This is the time that is dedicated to visiting families and enjoying the spoils of the previous days of cooking.  Traditionally the families meet in prayer first and then socialize, catch up, gossip and eat.

Popular sites like the botanical gardens in Bedugul and Wisnu Gardens in Jimbaran are visited together with children and families. These day trips are noisy affairs with much fun and laughter and family togetherness.

10 days after Galungan Day, it is believed that the ancestral spirits leave their home and return to wander the universe. The end of the ceremonies culminates in Kuningan which is traditionally marked with wearing yellow (Kuning being yellow).

If you are a solo female traveller during this special time then you are blessed by the Hindu Deities such as Sang Hyang Widi and the Supreme Gods that grace the Island during the 10-day aperture. If you have Balinese friends, do make sure to ask how you can help and whether you can join them in prayer at the Temples for prayer.  It is a very special time in Bali.

Beyond that, it is a euphoria of colour, music and food and Galungan will certainly add many beautiful images in your life as a traveller or your portfolio of photos.

It will take the Gods and ancestors another 210 days to visit the Island. And if you miss the February celebrations you can catch them again in September 2020. 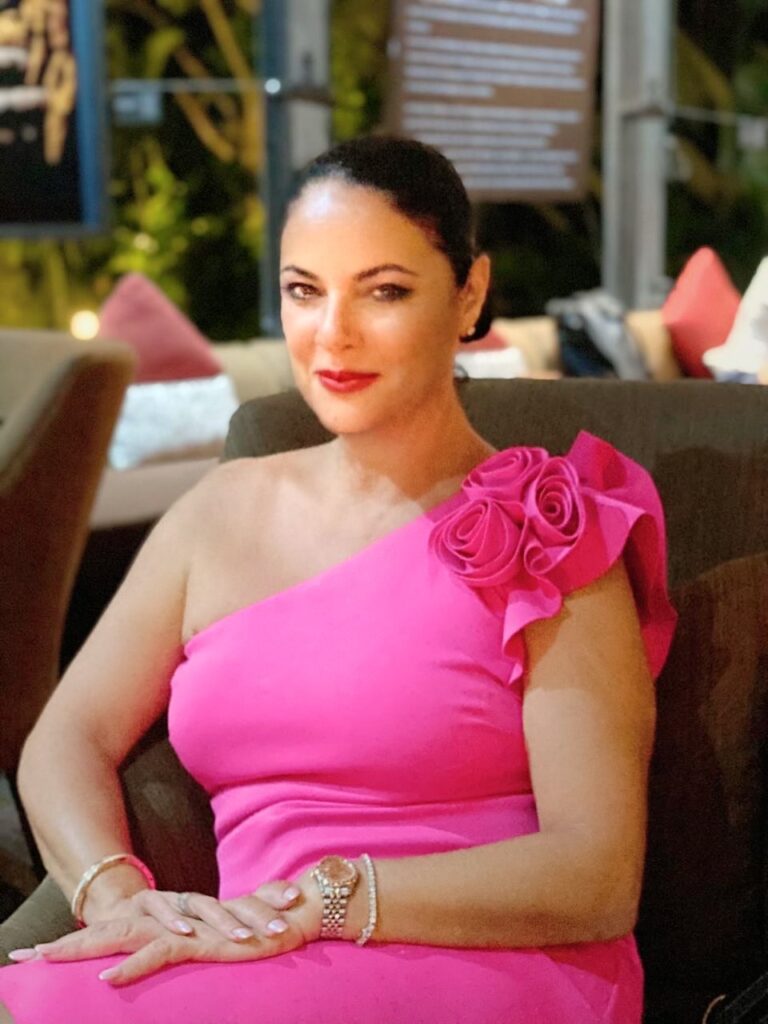